It is our favourite day of the month! The sun is shining yet again and it is time to announce our Care Worker of the Month award winner for August!

We are delighted to announce that the winner is Jackie Trevor. Jackie is a support worker at Cartrefi Cymru in Wales.

Jackie is a shining example of going above and beyond in her role and we are thrilled to recognise her incredible effort and dedication.

Jackie began her career with Cartrefi in October 2004. I chose the word career with a great deal of thought and honesty, because to Jackie this isn’t a job it is something that not only is she good at, she inspires others to achieve the same level of support.

Jackie principally supports a gentleman (RT), that has minimal verbal/cognitive ability, but he has boundless energy and has in the past been a challenging man to support. During the time I have managed Jackie I have never found her wanting in enthusiasm and a willingness to take on new ideas and processes with a passion.

Jackie will be the direct liaison between RT and the professional agencies involved with RT care from the Social Services through the entire gamut of medical professionals and she also tasks the housing association to see that RT’s home is in the best condition possible.

Jackie came to me recently seeking a way to increase RT’s independence and suggested developing a pictorial dictionary.

This is essentially a communications mat combined with Pecs, but she was unaware of the system. I explained the system of pecs and she tried for a period but found that it was not effective as RT couldn’t associate cartoon pictures with what he perceives as his reality.

I stated earlier that she inspires others. This is demonstrated by the fact that it is to her I go to mentor new staff into the Cartrefi way of Active Support and total support through Person Centred planning.

That these new employees don’t necessarily go on to work in RT’s team is irrelevant. I know that in which ever house I place them, they will take the methods and ethos of support with them.

RT simply could not have a better support worker. New Ideas, New activities, New experiences but a consistent approach to delivering the best.

RT also benefits from a very positive public presence. There is not a café in town in which he is not welcome, and he puts a smile on everyone’s face. What’s important to note is not that this is a nomination for RT (although it seems as such) but RT is the best person to nominate Jackie for the award, yet he can’t.

The way he is accepted in his community is the demonstration of how well Jackie has promoted his dignity, his individuality and most importantly in my mind she has normalised the localities perception of RT.

Jackie gives of herself to those she supports, but looks for no credit and I truly believe she represents the absolute best in the world of disability support.

Thank you so much for all you do Jackie.

If YOU know our next Care Worker of the Month, please do email us at info@socialcare.tv.

And if you entered in August but did not win, please feel free to enter again as many times as you wish.

Have a wonderful weekend!

We are delighted to announce that this month’s winner is Mark Bailey – Community Carer for Caremark Thanet. 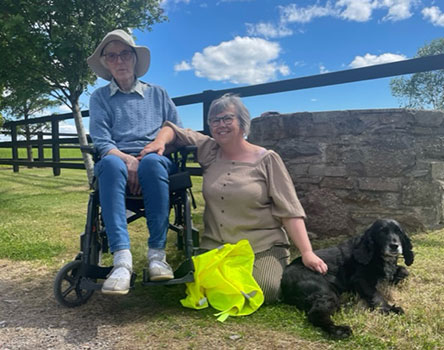 We are delighted to announce that our winner for June is Gillian Ross of GR Care Services, Forres.

Our winner for May is Stephen Delaney – a project worker – who was nominated by Social Care and Housing Manager, Jenna Mooney from MVN associates.